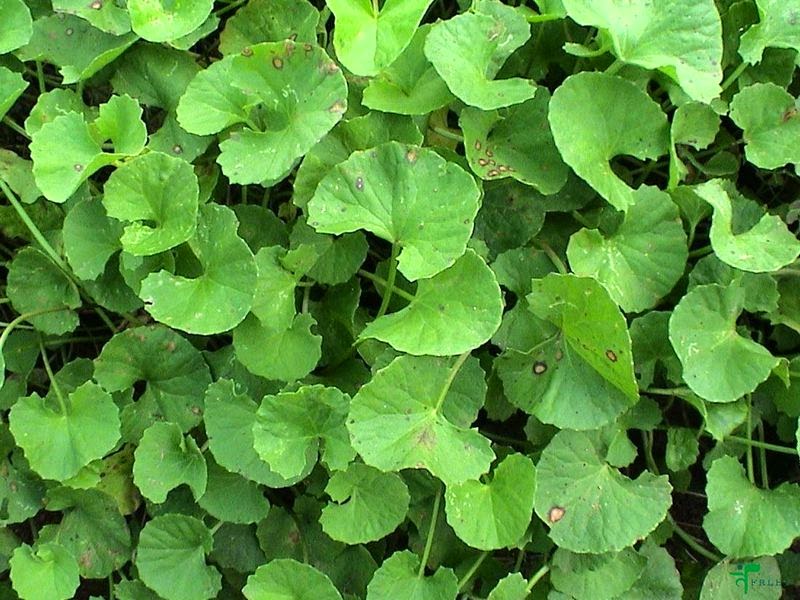 Centella asiatica, known as Gotu Kola, is a medicinal plant that has been used in folk medicine for hundreds of years as well as in scientifically oriented medicine is a perennial, herbaceous creeper with kidneyshaped leaves. It has beenused in traditional medicine as an antipyretic, diuretic andantibacterial drug and in the treatment of skin disease, veininsufficiency andmental disorders. It is native to Asia andmainly found in India, Pakistan and Madagascar, but the plant also grows in tropical and equatorial Africa, America and thetropical regions of Oceania. It has been widely cultivated as avegetable or spice in China, Southeast Asia, India, Sri Lanka,Africa and Oceanic countries.Is frequently blended as a daily drink and eaten as vegetable in Southeast Asia.

The primary active constituents of CA are saponins (also called triterpenoids), which include asiaticosides, in which a trisaccharide moiety is linked to the aglycone asiatic acid, madecassoside and madasiatic acid. These triterpene saponins and their sapogenins are mainly responsible for the wound healing and vascular effects by inhibiting the production of collagen at the wound site. Other components isolated from CA, such as brahmoside and brahminoside, may be responsible for CNS and uterorelaxant actions, but are yet to be confirmed by clinical studies. Crude extract containing glycosides isothankuniside and thankuniside. In addition, the total extract contains plant sterols, flavonoids, and other components with no known pharmacological activity.

Applied to open wounds in rats (3 times daily for 24 days) resulted in increased cellular proliferation and collagen synthesis at the wound site, as shown by an increase in collagen content and tensile strength wounds epithelialized faster and the rate of wound contraction was higher when compared to the untreated control wounds.
Asiaticoside, a constituent in CA, has been reported to possess wound healing activity by increasing collagen formation and angiogenesis. Apart from showing a stimulation of the collagen synthesis in different cell types, the asiaticoside were shown to increase the increased hydroxyproline tensile strength of the newly formed skin collagen content and epithelialization, then the healing of the wounds. Also, it was shown to inhibit the inflammatory process which may provoke hypertrophy in scars and improves the capillary permeability. Furthermore, triterpenes from C. asiatica were shown to increase remodeling of the collagen matrix and stimulate glycosaminoglycan synthesis in a rat wound. Oral administration of madecassoside(6, 12, 24 mg/kg) isolated from C. asiatica herbs facilitated burn wound healing in mice through its antioxidative activity, collagen synthesis and angiogenesis.

Keloid, a result of abnormal wound healing, is characterized as exuberant collagen deposition and invasive growth beyond original wound margins. The high recurrence rate after surgical excision and lack of effective therapeutic modalities still remain unresolved. In our current study, we demonstrated for the first time that asiatocoside suppressed phosphorylation of Smad 2/3 induced by TGF-β1 stimulation, and thus inhibited collagen type I expression in keloid fibroblasts. Moreover, asiaticoside elevated Smad 7 protein level and suppressed PAI-1 expression in TGF-β1-treated keloid fibroblasts. Noteworthy, the effects of asiaticoside on keloid fibroblasts were mediated by PPAR-γ since these effects were abrogated byPPAR-γ antagonist GW9662 and by PPAR-γ silencing.
Venous insufficiency

In cosmetology C. asiatica has been used as an effective anti-photoaging agent, mainly due to enhancement of type I collagen, which amount in skin decreases with age. The action was confirmed in a randomized, double blind clinical trial conducted among 20 female participants(45-60 years old) with photoaged skin to examine the impact of topically applied 0.1% madecassoside in conjunction with 5% vitamin C on their skin. Six-month treatment resulted in a significant improvement in firmness, elasticity and skin hydration, which was confirmed by appropriate biometrological tests. It is considered that the beneficial effect of C. asiatica on improving the condition of skin was due to madecassoside, a known inducer of collagen expression by activating the SMAD signaling pathway. In the previous study, the same investigators confirmed the beneficial effect of 5% vitamin C on photoaged skin, which resulted from stimulation of collagen synthesis in fibroblasts and control of matrix metalloproteinase enzymes responsible for degradation of collagen, while in photoaged skin, the level of vitamin C in tissues was significantly reduced. Thus, it follows that the mixture of vitamin C and madecassoside is an attractive combination of two active compounds characterized by different mechanisms of activity, which exert an additive or synergistic effect “causing the remodeling of the superficial dermis”.

Centella asiatica is a common ingredient of cosmetics used in cellulite and striae. Cellulite, known as liposclerosis, is a non-inflammatory change within the subcutaneous adipose tissue caused by an increase in the volume of fat cells or by increased division of the connective tissue, which causes constriction of small blood vessels. The result is a disorder of metabolism in the subcutaneous adipose tissue, resulting in "distended" fat cells in this tissue, particularly around hips, buttocks, abdomen, thighs and arms. Cellulite is an ailment that affects many people, most frequently women, especially obese and leading stationary lifestyle, but may even be ncountered in children. Preparations that affect the adipose tissue, connective tissue and improve microcirculation are applied in the treatment of cellulite. They can be used topically, internally and transdermally. It is recommended to include medicines of plant origin in the fight against cellulite. Methylxanthines (caffeine, theobromine, theophylline) have a lipophilic effect, while the extract of C. asiatica normalizes the metabolism occurring in the cells of the connective tissue, shows anti-inflammatory and draining activity and regulates microcirculation.
The study confirmed the influence of triterpenes of C. asiatica on increasing the metabolism of lysine and proline, the amino acids building the collagen molecule. In addition ,these compounds increased the synthesis of tropocollagen, and mucopolysaccharide in the connective tissues. The results obtained showed the impact of C. asiatica on improving nutrition of tissues and connective vascular stimulation.The positive effects of the treatment of cellulite with the C. asiatica extract were confirmed by a few clinical studies that used different methodologies.

The effects of CA upon pain (antinociception) and inflammation in rodent models were reported.The antinociceptive activity of the aqueous CAE (10, 30, 100 and 300 mg/kg) was studied using acetic acid-induced writhing and hot-plate method in mice while the antiinflammatory activity of CA was studied by prostaglandin E2-induced paw edema in ratsThe aqueous CAE revealed significant antinociceptive activity with both the models similar to aspirin but less potent than morphine and significant antiinflammatory activity comparable to mefenamic acid. These results suggested that the aqueous CA extracts possesses antinociceptive and antiinflammatory activities which justified the traditional use of this plant in the treatment of inflammatory conditions or rheumatism. Recently, antirheumatoid arthritic effect of madecassoside in type II collagen-induced arthritis (CIA) in mice was studied to investigate the therapeutic potential and underlying mechanisms of madecassoside on CIA. Madecassoside (10, 20 and 40 mg/kg), orally administered from the day of the antigen challenge for 20 consecutive days, dose-dependently alleviated the severity of the disease based on the reduced clinical scores, and elevated the body weights of mice. Also, a histopathological examination indicated that madecassoside alleviated infiltration of inflammatory cells and synovial hyperplasia as well as provided protection against joint destruction. Moreover, madecassoside reduced the serum level of antiCII IgG, suppressed the delayed type hypersensitivity against CII and moderately suppress CII-stimulated proliferation of lymphocytes from popliteal lymph nodes in CIA mice. In vitro, madecassoside was proved to be ineffective in the activation of macrophages caused by lipopolysaccharide.It was concluded in the study that madecassoside substantially prevented mouse CIA, and might be the major active constituent of CA responsible for its clinical uses in rheumatoid arthritis and that the underlying mechanisms of action may be mainly through regulating the abnormal humoral and cellular immunity as well as protecting from joint destruction.